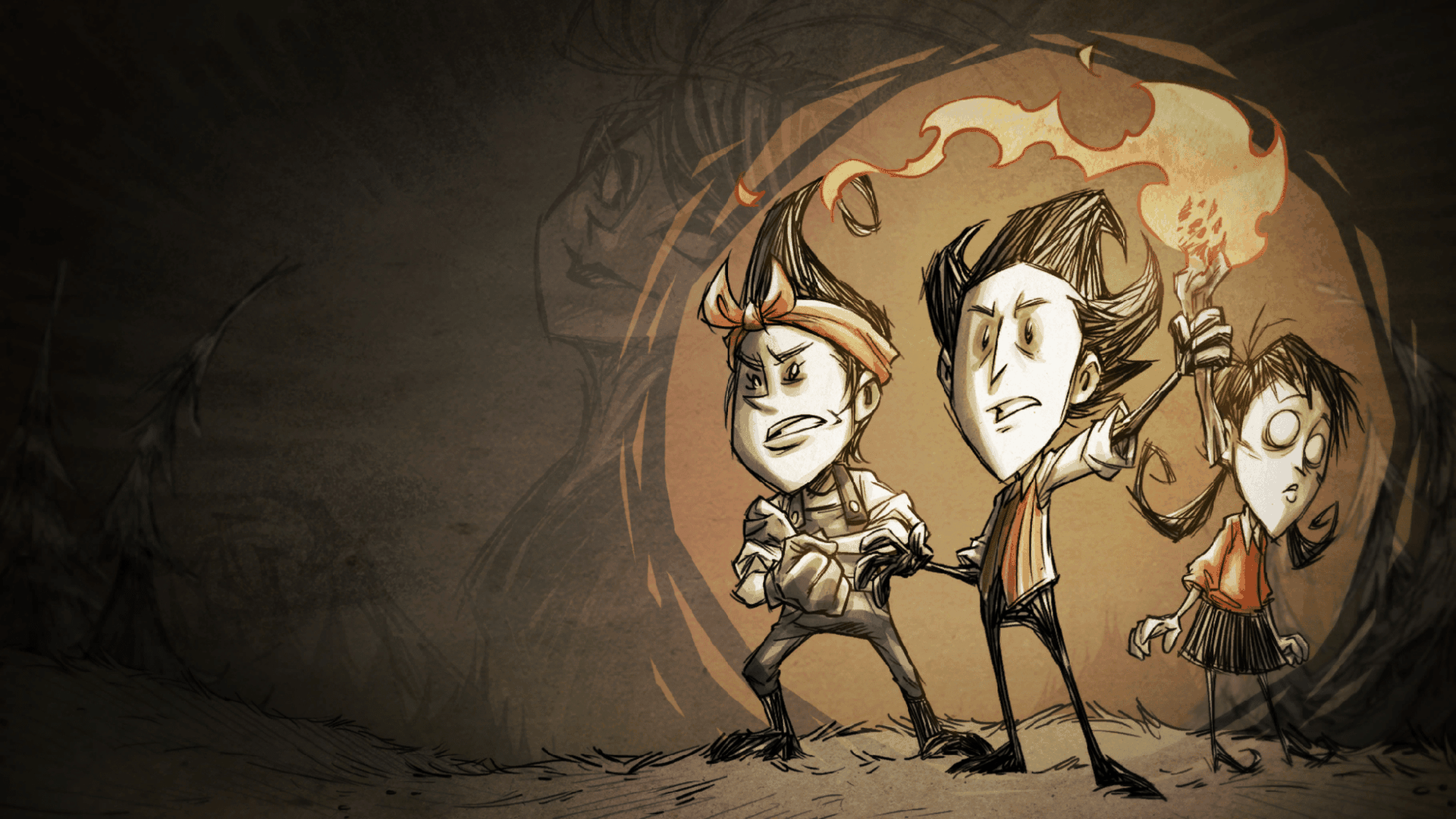 A comprehensive guide to the first 5 days

So, you’ve decided to delve into the world of Don’t Starve Together (DST)? Bravo my friend! You’ve opened the game, found a buddy and generated a world with the default settings. What now? This tutorial walks through a tried and true strategy for beginners to survive whilst setting up the groundwork for a successful game.

The aim of the game is to survive. You will face the challenges of hunger, sanity loss and health damage as you battle against creatures and the elements. The world you are placed in is randomly-generated with many different biomes (forest, grasslands, desert, swamp and more), each of which will contain resources essential for surviving and progressing in the game. Each day is divided into day, dusk and night. Without a source of light at night, you will die very, very quickly.

You’ve landed by the portal. What should you do at the minute?

There are 3 key things you need to do in parallel:

It's very important to note that resource gathering and exploration are key prior to establishing a base.

There are 8 primary resources you will need to gather in the first few days. They are: twigs, grass, flint, logs, stone, food, gold and flowers. Because world generation is random, some of these may be much harder than others to find. Therefore, for your first day prioritise:

Collect these along the way as you explore the world. Always try to keep a supply of 10-20 in your inventory.

It's worth mentioning that resources have their own stack limit per slot in your inventory. For example you can collect 40 twigs in one inventory slot. During the first 5 days, as a rule of thumb, it's generally not worth collecting more than a full stack of any one resource. It's more efficient to focus your attention on the resources you have fewer of.

Always keep an eye out for boulders with gold accents running through them. These boulders can be mined for both gold and stone. Gold is the gateway resource for almost everything in the game. You should collect a minimum of 3-4 but more is better.

Stone is critical for building a fire pit and advancing later on. Aim to collect around 20-30 stone (again, more is better).

Focus your efforts on finding the boulders with the gold lines running through them. Mining regular boulders is not worthwhile in the early game. The only reason you might want to consider mining these is if you are desperately in need of flint.

Depending on the map generation, finding gold can take up to 4-5 days if you're unlucky. Gold is important because it is used to create the science machine and later, the alchemy engine. More on that below.

Logs are collected from chopping down trees with an axe. They are a primary resource used to construct numerous buildings and items. Specifically you need them to build campfires and fire pits. Try to collect a full stack of 20 logs during the exploration phase. It's also handy to keep 10-20 logs in your inventory at all times.

Trees have different stages of growth in the world of DST. Cut down the tallest trees to get more logs and also get pine cones. Pine pones can be planted which creates a sapling tree that will eventually grow.

Note: Stumps left behind after you cut down a tree will not grow back. They can be only removed with a shovel (more on the shovel below).

You should pick flowers as you come across them but you don't need to actively seek them out. They are less important than the other primary resources we've mentioned. Having said that, they are useful to pick early on for two key reasons:

Over time you'll get hungrier and your hunger meter will decrease. You'll need to eat food to keep yourself from starving. During Days 1-5, you will be continuously exploring so your hunger should be able to be managed relatively easily.

For these early days, you'll be able to survive by eating berries, seeds and carrots.

Some guides may tell you not to eat carrots because they do not respawn. Our advice is to just eat them anyway! This is a beginner's tutorial and there's a high chance you'll die of something else before you would ever need the carrots you decided not to pick.

Food and some other items will spoil over time. They will start with a green background, which turns to yellow and finally red. You can eat food that is green or yellow, but once it's red you should not eat it. Carrots and seeds spoil slower than berries. If you have the choice, eat your berries first.

Our strategy for the early game is to explore as much of the map as possible. Early exploration has the following benefits:

The best way to explore the map is by following the coastline. This is a systematic approach to explore all areas; if you never leave the coastline, you can eventually make your way around the whole main island.

In doing so, you'll discover all the different biomes and come across many creatures and resources which you will require later at various points throughout the game.

One caveat is that we would strongly advise avoiding the marshes or "swamp". There really isn't anything essential you need there for survival (in the first few days). Additionally, they are extremely dangerous because there are hidden tentacles which will come out the ground and do a lot of damage.

Similarly, the desert biome is not hugely beneficial to explore early on so you would be fine to just see where the biome begins and ends. You'll recognise this one when you come across cacti and bones.

This is Don't Starve Together for a reason.

In general, there are two main strategies for exploration when playing with a friend:

For this guide, we recommend the first option: Divide and conquer (but stay safe!). It's inefficient to both explore the same parts of the map; you will be competing with each other for resources and it's slower to reveal the map.

Stay aware of where your friends are in case you are in need of food or a resource. Tip: The Global Positions Mod will let you see the location of all players and see the parts of the map that they have explored.

During the exploration phase (unless you are a more seasoned player), you probably don't want get too curious and engage in any combat. Remember the aim is to explore and gather resources!

Worm holes allow you to teleport between two different locations on the map. Jumping in a worm hole will transport you to the corresponding worm hole on another section of the map. This will cost you 15 sanity. Generally, they are worth exploring and seeing where they go. Don't jump back and forth as you can lose sanity very quickly doing this.

You can expect to come across 3-4 pairs of worm holes in your travels, so try to remember where each ones goes!

Roads and paths will increase your movement speed thus allowing you to walk long distances faster. Because our strategy is to follow the coastline, you generally won't be walking on roads too often in Days 1-5, however they are incredibly useful when you need to return to different parts of the map quickly.

Crafting is the mechanism by which you create new items and buildings. The first items you will need are: pickaxe, axe and torch.

This should be the first item you craft because you use it to mine boulders for stone, gold and flint. Craft a pickaxe before an axe; if you spawn into a world where flint is less abundant, you'll need the pickaxe to mine boulders in order to get more flint. You cannot mine boulders with an axe.

An axe is used to chop down trees for logs. It is also an alright combat weapon in a pinch (better than a pickaxe).

At the end of the each day, make sure you have a couple of torches at the ready to survive the night. 1 new torch will last you the whole night in the early game. Using torches instead of building campfires allows you to continue the strategy of exploring the coastline even during the night. You only really need to build a campfire if you have things to cook.

The backpack gives you 8 extra inventory slots. This is invaluable during your exploration for collecting items and resources.

The shovel is a very important item that is is used to dig up resources so that they can be replanted somewhere else. The resources you will be focusing on are:

With these three resources, you will be able to build up a farm of resources and food to keep you alive through the winter. Aim to dig up 20 of each (10 each for you and your friends).

These are rough guides and should be achievable with 2 or 3 players. We've done many playthroughs and here is an example of one player's inventory after 5 days. It had 15 grass tufts, 30 saplings, 14 berry bushes and plenty of other primary resources at the end of Day 5 / start of Day 6.

Check out our next DST Beginner's Tutorial which covers:

Good luck, have fun and Don't Starve Together!

You can open Chester to make 9 more inventory slots available. If you drop the eye bone on the ground Chester will stay near it and no longer follow you.

What is Dual Coding?

A introduction to Dual Coding for teachers and how it can be used to promote effective learning in the classroom.

What is Dual Coding?

A introduction to Dual Coding for teachers and how it can be used to promote effective learning in the classroom.